THEME I: Identification of disease biomarker proteins that can be used for early diagnostics or monitoring disease or treatment response

Biomarkers help physicians diagnose or monitor a disease and predict future disease course. The laboratory focuses on a specific category of biomarkers, namely proteins. Unlike DNA and RNA molecules, proteins immediately mediate function, and are responsible for all “phenotypes” and disease manifestations.  Hence, proteins have immense biomarker potential.

The laboratory utilizes a variety of targeted proteomic platforms that have already proven to be very useful in uncovering novel biomarkers in a variety of body fluids in several chronic diseases, most notably in a couple of autoimmune diseases (including lupus, inflammatory bowel disease, systemic sclerosis and ankylosing spondylitis) and cancers (notably bladder cancer and colorectal cancer). In targeted proteomic approaches, specific ligands to the target proteins, such as antibodies or aptamers, are used as capture reagents to interrogate the presence and levels of the target protein biomarkers.

Proximity to crime scene is of utmost importance in biomarker screens. Our completed studies indicate that the closer one gets to the site of pathology, the higher the chance of uncovering disease biomarkers originating from the diseased tissue. Thus, for example, if the kidneys are diseased, urine emerges as a richer source of biomarkers compared to the blood from the same subjects. Likewise, in intestinal disease, the stools appear to be a richer source of potential biomarkers compared to blood. Hence, targeted proteomic screens of body fluids directly draining the diseased tissues are the richest sources of disease biomarkers, possibly originating directly from the diseased cells.

Once protein biomarkers are identified through the performance of comprehensive targeted proteomic screens, they are validated in larger patient cohorts using ELISA assays. Finally, the laboratory is interested in transforming the biomarker leads into diagnostic test panels or kits, suitable either for laboratory-based assays or for simple “point-of-care“ (POC) assays (akin to pregnancy test strips) that the patient can perform in the comfort of his/her home. These studies are paving the way towards the identification of clinically useful markers for longitudinal disease tracking, while also pointing to potential therapeutic targets.

Ongoing studies in this space include: 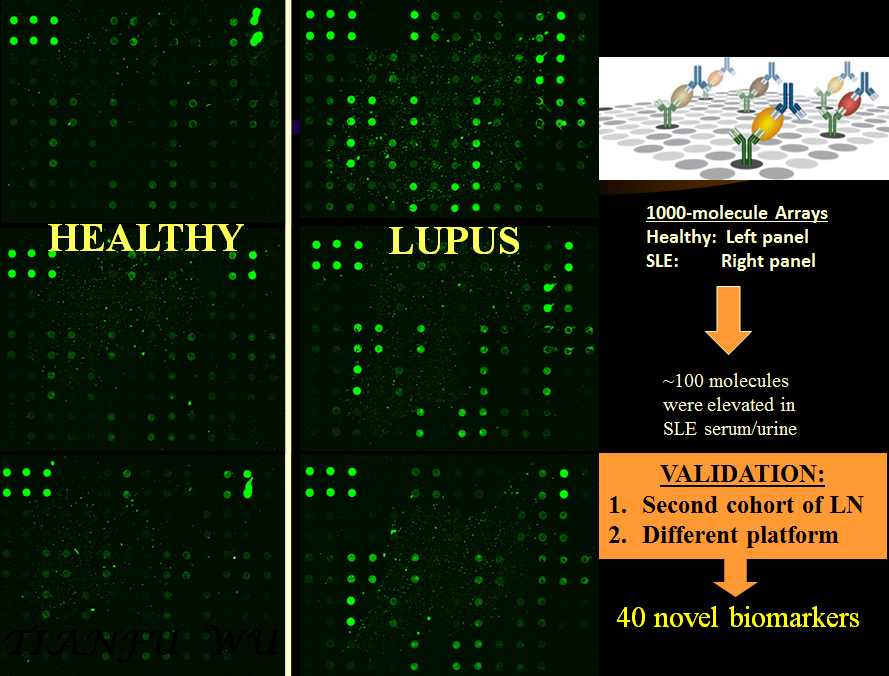 Figure 1: When body fluids (serum or urine) are added to planar arrays bearing 1000 antibodies that are specific for 1000 different human proteins, several of these proteins are found to be elevated if the body fluid is obtained from patients with the autoimmune disease, lupus (or SLE), as denoted by the bright green spots on the right side of the divide, compared to body fluids from healthy subjects. Several of these protein elevations have been validated using another platform (ELISA), and are currently being evaluated as potential diagnostic, predictive, prognostic and treatment response biomarkers in patients with SLE and lupus nephritis, using several different patient cohorts. 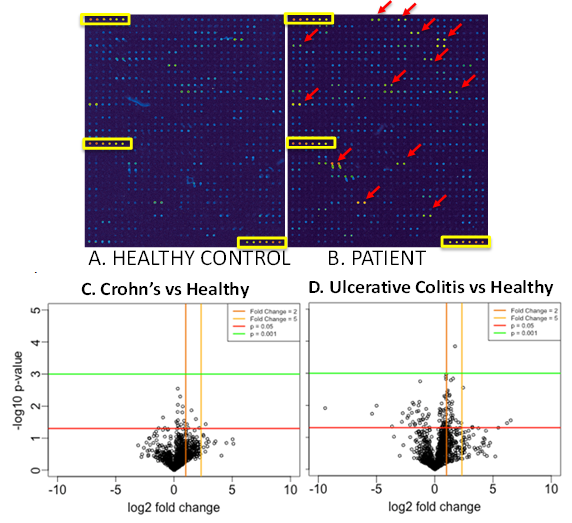 Figure. 2: Targeted Proteomic Screens of stools from patients with inflammatory bowel disease, including ulcerative colitis (UC) and Chron’s disease (CD). Depicted are representative images of a subsection of a planar array treated with stool lysate from a healthy control (A) and a patient with UC (B). This array allows the interrogation of 1000 proteins simultaneously, using 1000 monoclonal antibodies printed on the slides. Of the 1000 proteins screened, several proteins were elevated either in CD (C) or UC (D) at 2-fold or 5-fold levels (vertical lines), at varying degrees of statistical significance (horizontal lines), as summarized by the Volcano plots. These stool protein elevations have been validated using another platform (ELISA), and are currently being evaluated as potential diagnostic, predictive, prognostic and treatment response biomarkers in patients with UC or CD.

The global screens for disease biomarkers often leads to the discovery of key proteins that may be important for disease pathogenesis and novel targets for therapy. These have been performed mostly in lupus. Disease targets that have previously been tested for therapeutic efficacy in our laboratory include AXL, BAFF, Bim, bradykinins, BTK, CD40/CD40L, CSF1, CXCL16, CXCR4, FAAH, KLK, mTOR, OXR1, PKCb, SOD, TREM-1, etc. Natural products or supplements that have been evaluated in the past include CDDO-me (in lupus mice), curcumin (in lupus mice), EGCG (in different mouse models of autoimmunity) and n3-PUFU (in lupus patients).

Figure 3. ALCAM was initially identified as a protein that was elevated in the urine of patients with lupus nephritis, based on an earlier proteomic screen in our laboratory. Current studies are focused on delineating the role of this molecule in the pathogenesis of lupus. Compared to kidneys from healthy controls (left panel), lupus-affected kidneys (middle and right panel) exhibit profound upregulation of ALCAM in several cells (stained red). Similar findings have been noted in the spleen. Genetic and pharmacological studies are underway to understand how ALCAM contributes to the pathogenesis of lupus nephritis. 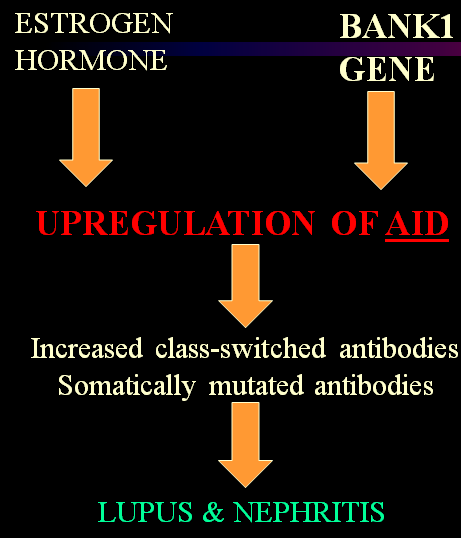 Figure 4: BANK1 is a human gene for the autoimmune disease, lupus (or SLE). To understand how this gene functions, novel strains of mice were generated harboring the human isoform of BANK1 that is associated with lupus. These BANK1 transgenic mice developed lupus only if they are females, alluding to the collaborative role of BANK1 and female hormones. Further studies indicate that both these components upregulate a critical gene called AID (AICDA), which is instrumental for the generation of pathogenic autoantibodies. Ongoing studies are aimed at dissecting the molecular pathways through which disease genes (i.e., BANK1) and gender (i.e., estrogens) may interact to augment immunity and autoimmunity.

Better imaging methods are warranted for the non-invasive diagnosis and monitoring of systemic diseases including lupus. Previously the laboratory has examined the role of FDG-PET, RGD-PET/CT, OCT and Raman Imaging in anti-GBM nephritis and lupus nephritis. 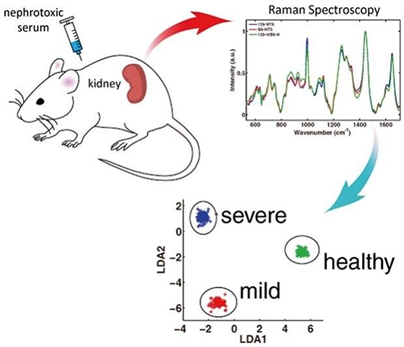 Figure. 6: Optical coherence elastograms (OCE) of systemic-sclerosis-like skin captured by PhS-SSOCE. Propagation of the elastic wave in a typical healthy mouse (A) and BLM-SSc systemic-sclerosis-like disease (B) skin, with data from multiple studies being summarized in (C).  Based on these initial studies, the same technology is currently being tested in patients with systemic sclerosis, which is a systemic autoimmune disease that affects the skin, lungs and gastrointestinal tract. Collaborators: Drs. Assassi and Larin.

Currently, lupus nephritis diagnosis depends on obtaining a biopsy sample of the kidney which is then stained and evaluated by a renal pathologist. These are several problems with this approach: (a) Invasive nature of the biopsy, which can be associated with side-effects, (b) sampling bias associated with the biopsy, which may not be reflective of the changes present elsewhere in the kidney, and (c) wide variation and imprecision in how renal pathologists score the pathology.  Our laboratory aims at identifying improved ways of diagnosing lupus nephritis, and related pathology.

Figure 7:  A simple convolutional neural network (CNN) prototype for the classification if lupus nephritis. 5 LN slides (one of each class 0 to IV) were used for training, and another 5 slides (one each of Class 0-IV) were used for testing, in order to develop a simple prototype. Plotted are precision – recall curves for each LN class (Left), and the confusion matrix (Right). Although very rudimentary, this simplified CNN exhibited perfect precision-recall curves (AUC = 1.0) for the lower GN classes. Currently, this CNN is being optimized to improve performance. (Collaborator: Dr. Nguyen).